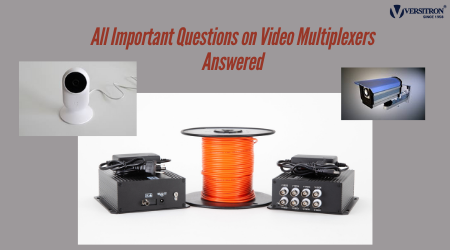 Here is the list of a few important questions on video multiplexers:

How does a CCTV multiplexer work?

Videos from several security cameras are transmitted over a coaxial cable to the BNC inputs of the multiplexer. Video multiplexers usually consist of one or more video outputs that can be connected to a monitor or TV. The software inside the video multiplexers combines the video signal from all the inputs and allowing the operator to select various displays including single-screen, four-screen, 8-screen, 9-screen, and so on.

What types of security are supported by video multiplexers?

How to switch screen modes?

Is it possible to use a multiplexer to live multiple cameras?

Yes, it is possible. Instead of using a DVR, a CCTV video multiplexer is widely used to combine the video signals from different cameras into a single view for live streaming. The installation process is quite similar; all you need to do is replace the DVR with a video multiplexer.

Is it possible to use a multiplexer with a DVR?

Yes, it is possible. Many of us use a video multiplexer in conjunction with a surveillance DVR. This is especially in cases where the DVR does not consist of a spot monitor output, and also if the client requires to set up multiple display monitors with multiple camera screen layouts.

Can multiplexers work with wireless HDMI transmitters and HDMI over powerline?

Yes, they work with wireless HDMI transmitters and HDMI over powerline kits too. With the kit, the video signal from a multiplexer can be transmitted to monitors using a standard power outlet/cable.

Is it possible to send videos over an IP network?

Yes. The HDMI over Ethernet kit supports one-to-many and many-to-many network configurations. Thus, one can display the security cameras on multiple monitors.

Are you looking for a video multiplexer for your critical surveillance application? If yes, then it is important to source it from a trusted manufacturer. To support a wide variety of camera features and combinations, VERSITRON offers high-quality and performance-driven video multiplexers that are available in 2,4,8 and 16 units. The video multiplexers are specially designed to be used with analog cameras found in several CCTV applications.