Fast Ethernet Vs Gigabit Ethernet: Their Differences Analyzed in Detail

Today, computers in Local Area Networks (LAN), Wide Area Networks (WAN), and Metropolitan Area Networks (MAN) are connected through Ethernet. This technology was introduced in the 1990s and is covered under the IEEE 802.3u standard. Ethernet is perceived as a low-cost network connectivity solution of all, because it allows businesses to expand their network without disturbing the existing workflow. This technology is generally used for connecting devices in a building and is not feasible for networks spanning across countries. It allows all connected computers in a network to communicate with each other through a single cable. There are several types of Ethernet, which are mainly differentiated based on their speeds. Of these, Fast Ethernet and Gigabit Ethernet are quite popular and still in use. How do these types differ? Which is the right Ethernet speed for you? Read the post to find answers. 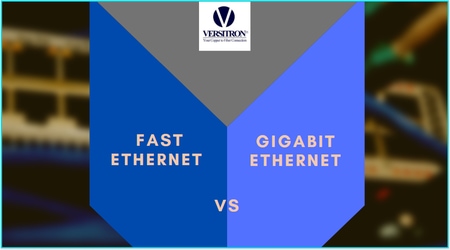 Fast Ethernet and Gigabit Ethernet are the two most confusing terms for many. The following pointers will help you gain a basic understanding on them.

Both Ethernet types are widely used for creating network connections in LAN. Be it Fast Ethernet or Gigabit Ethernet – both types use fiber optic cables, twisted pair cables, fiber optic Ethernet switches, and so on. Having said that not all cables can support these Ethernet types. For instance, the Cat5 or Category 5 cable supports 100-Base-T Ethernet and traditional Ethernet; the Cat5e or Category 5e cable supports GbE; and Cat6 or Category 6 cable supports 10GbE. Although both these types work on the concept of Ethernet, still, they have some considerable differences between them. The following pointers will help you understand it better and give tips on how to choose between Fast Ethernet and Gigabit Ethernet.

A Quick Overview for Fast Ethernet and Gigabit Ethernet

This comparison chart comprises summarized information from the above section. It offers you quick insights on key differences between Fast Ethernet and Gigabit Ethernet. This quick comparison will help you memorize the advantages and challenges of each technology easily.


Having known the differences between these two types of Ethernet, the selection becomes easy. If you are still unable to make up the mind it is always better to approach an expert. To execute it, you need to invest in quality devices. There are several manufacturers who offer quality Ethernet switches and devices and VERSITRON stands tall among them. The company provides managed switches with 4, 6, 10, 24, and 56 ports.