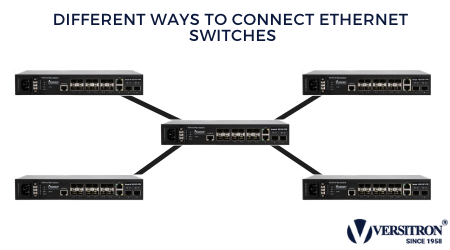 The Ethernet switches are connected in either of these three ways:


The purpose of this technique is to form a topology of Ethernet switches. The following are two types of topologies formed using this technique.


These three are the popular techniques used to connect multiple Ethernet switches. The choice of the method will depend on the application requirements. Generally, for simple Ethernet networks, cascading is preferred, however, clustering or stacking may be adopted for complex networks.

Media Converter for CCTV Video and IP Video System
Guide to Enterprise Switches and Their Selection
Selecting the right Industrial Ethernet Switch for your network
Know the Methods of Transceiver Port Conversion
Optical Transceiver vs. Transponder: Differences between the two