Know the Difference Between RJ45 Port and RJ11 Port

Right from the good old days of analog telephones and faxes, cables and connectors have been an integral part of network communication. With the advancements in electronics, internet technologies, and the importance of data communication apart from voice, the demand for private business networks, and subsequently the required devices has only grown. RJ11 jack and RJ45 jack connectors have been there for a very long time, and in fact RJ45 is still used in copper cable data communication networks. RJ basically stands for Registered Jack, and as the numbers in the terms imply, RJ11 is much older than the later. The numbers 11 and 45 are the interface standards. This post compares RJ45 vs RJ11 connectors and more. 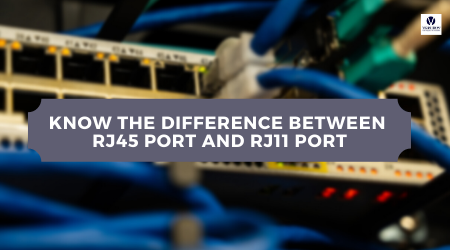 What is a Registered Jack?

RJ stands for registered jack. These jacks serve as an interface for telecommunication as well as data networks. They connect voice or data devices to a central router or modem, especially in small sized networks. In large networks, they are used with the help of switches. Any RJ45 connector has male and female versions. Male parts are the plugs on Ethernet cable ends, while female parts are the sockets on devices. Mostly, Ethernet cables used in networks are eight strands of wires that are paired, which means there are four sets of twisted wire strands. This wiring is based on 8P8C configuration, wherein P stands for position and C stands for contact. The standard wiring used for the functioning of RJ45 network connectors is T568A or T568B. Both these standards have different types of connectivity and are color coded accordingly. The male connector has pinout locations wherein all these eight strands of Ethernet cable must be connected accurately for the correct functioning. With the help of these connectors, you can simply plug in a device directly into a modem or router for internet connectivity. This is especially useful when working on standalone computers.

The following pointers on RJ11 and R45 cable connectors will help you understand it better.

What is the difference between RJ45 and RJ11?

Here are some pointers regarding the major differences between RJ45 and RJ11:

Do you have an existing legacy network which you plan to expand in terms of transmission distance and speed? If yes, it would be wise to blend fiber optics into your existing copper cable network. However, ensure you source all the network devices from a certified and reliable manufacturer and supplier. VERSITRON offers several network devices compatible with copper as well as fiber networks. The company offers network switches and fiber media converters with RJ45 ports for copper as well as SFP+ ports for fiber.