WiFi or PoE Camera System Which One to Choose and Why?


In recent times, the video surveillance system has become an important requisite at business as well as residential levels. They always played a key part in defense for several critical applications. Many businesses, especially small scale ones, understated the importance of a surveillance system. However, it is essential in the current times to ensure the overall safety of employees, the confidentiality of data, and safeguarding other such important aspects of a business. Today, WiFi and PoE camera systems have emerged popular security solutions. Both the security systems are gaining immense momentum owing to their beneficial features. No matter what you choose WiFi or PoE cameras, it’s quite difficult to ignore the importance of these security devices in every facet of our daily lives. This post explores WiFi and PoE camera systems in detail. 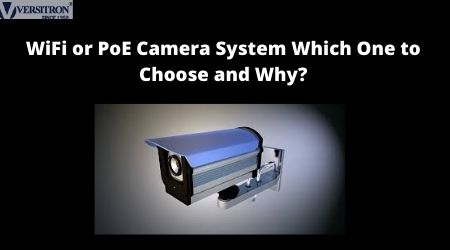 An Introduction to PoE Camera Systems

Before comparing WiFi and PoE cameras systems, it is important to know more about each of them. This section explains PoE cameras in detail. A power over Ethernet (PoE) camera is much like a traditional security camera. As the name suggests, it is the wired system that requires cables for power, video transmission, and internet connection. PoE technology is used to transmit both data as well as power through a single cable. IP cameras equipped with PoE technology can send video records to the network while receiving power from the same PoE switch. This makes the installation process more flexible and easier than the latter. PoE cameras are known for their reliability and consistency. Unlike WiFi cameras, these systems do not face issues such as interference and signal jamming.

As an alternative to PoE cameras, a WiFi camera system connects cameras to a wireless router without any hardwired connection. Thus, it is called a WiFi camera system. However, they still require wired power. They transmit security footage from the camera to the recorder, further, which can be accessed within a network or remotely through app or software. This means the user can access the footage either through cloud storage or built-in devices. Through software, the user can not only view the cameras’ video feed but also have access to several features of cameras settings. Additionally, the user can access sound or any movement that takes places within its radius.

WiFi vs PoE Camera System – How to Make an Appropriate Selection?

Both WiFi and PoE security cameras can offer basic monitoring functions, but they are rather distinct.  Both the systems have their pros and strength, so it’s not simple to make a wise and quick decision. The following pointers will help you better understand their benefits in distinct applications.
Are you looking for a reliable camera for your surveillance system? Ensure you source them from reliable suppliers who have their networking experts. No matter what you choose, VERSITRON is 24*7 available for help. Their wide range of inventory ensures the highest performance for most of the demanding applications.