Ethernet networks use various networking hardware for ensuring the connectivity of devices and the Ethernet switch is an important one among them. It is considered as the brain of a network that uses the hardware addresses to connect to the devices effectively. Owing to their increasing importance, today, switches are designed in diverse specifications and configurations. Sometimes they are differentiated based on other factors like Ethernet switch port and more. But, how many of you have ever noticed the ports on network switches? Ethernet switches may come in different port types, and work on distinct switch port modes. In this post, common Ethernet switch port types are briefly introduced in terms of data rates, network architecture, and functions. This would help you understand their differences and make the right preparations for your future network plans. 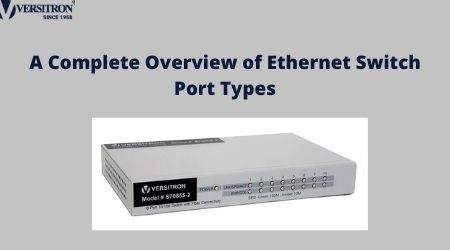 The data rate is one of the important factors for an Ethernet switch interface. It varies from 1G to 100G and beyond. Here is the list of mainstream interface types of these data rates.

Like data rates, functions, as well as applications are vital for Ethernet switch connector types because the same port is used for various purposes. This helps us gain insights into Ethernet switch port types configurations.

Types of Ethernet Switch Ports based on Network Architecture

Knowing the appropriate switch ports number helps you select the right switch for your network applications. If you are planning to buy Ethernet switches for your upcoming networking campaign, then source them from a reliable, trustworthy and industry-leading supplier like VERSITRON. The company specializes in offering network switches in various configurations. To know the cost of industrial switches, industrial PoE switches and all fiber switches, visit versitron.com

Rich Tull
R.W. Tull is the President of Versitron Inc. He works closely with clients to review layout diagrams and drawings in order to ensure that the best fiber optic solution is achieved for a particular project.