RS-232, originally known as EIA-RS-232, is primarily an interface between computers and various other devices on a network. RS-232 is used for data transmission in industrial environments. EIA stands for Electronic Industries Alliance which has designed the protocols and standards for serial data communication to which RS-232 complies. This is the most commonly used interface for connecting the computer to its peripheral devices such as serial data converters or modems, printers, data storage devices, and so on. RS-422 and RS-485 are advanced variants of RS-232. These are primarily used when the data communication distance is a few kilometers. These work as an interface and serial buses for multiple devices such as serial to fiber media converters used in large and complex networks. This post discusses the difference between RS-232, RS-422, and RS-485 interfaces and more. 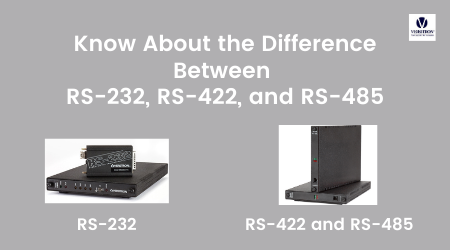 A Brief Introduction to Serial to Fiber Media Converters

RS-232: This is the oldest of the interfaces, and hence mainstream and basic. Being developed in accordance with the technologies, standards, and speeds a few years ago, it lacks the transmission rates of 422 and 485 interfaces. Also, there are some issues in terms of the signal level being high to the extent of damaging the circuit. Also, this interface works on a common transmission form for sending and receiving signals. This may introduce EMI and noise. The distance of data transmission with the help of this interface can be a maximum of up to 50 feet or 15 meters. The transfer mode for RS-232 to fiber converter interfaces is full duplex. So, this is used for connecting a computer to nearby devices. However, in some cases, you can use certain hardware for extending this transmission distance. This can be connected with the help of D-sub connector or a 9-pin DB9 connector. With this interface, three types of connections can be established- one computer terminal to the other, computer terminal to communication device, and one communication device to another communication device.

RS-422: This is an advanced version of RS-232 which enables a balanced voltage in the circuit. It works on a master and slave model, which means one master device is connected to several slave devices. So, the master device is a single point of communication for other devices. The other slave devices cannot communicate among each other. You can send and receive data signals simultaneously, albeit on separate transmission lines, unlike RS-232. This helps reduce noise to a large extent. Also, with this interface, the distance of transmission is much higher than RS-232, and can reach up to 1200 meters. However, the speed of transmission reduces as the distance increases. So, typically, you can achieve a speed of 10 Mbps only for up to 10 meters. The speed would reduce to 12Kbps for a 1200-m distance. Usually, you can connect to this device using a DB9 connector.


RS-485:This interface is a serial bus which overcomes most drawbacks of the previous two versions. This interface is sensitive to the lowest amount of voltage changes and uses balanced transmission and differential reception modes for sending and receiving data. This is useful in networks with multipoint distribution systems and you can connect several drives and receivers. This interface works on a half-duplex mode with two contacts, which means you can either send or receive data at a given point in time. With four contacts, it works in a full-duplex mode. The twisted pair cabling also helps reduce noise. With this interface you can connect up to 32 devices. With additional hardware and signal amplifiers, you can extend this number to 256 devices. You can connect to this interface using a DB9 connector. The speed and rate of transmission is almost the same as that of RS-422.

In case you are looking to expand your network in terms of distance and speed, you can opt for RS-232/422//485 serial to fiber media converters. Also, ensure you source them from known and certified manufacturers and suppliers. VERSITRON is a leading manufacturer and supplier of serial to fiber media converters, Ethernet switches, modems, and various installation kits.