Know if You Can Split an HDMI Signal Between Two Monitors

HDMI or high definition multimedia interface is a proprietary data transfer standard technology which enables sending uncompressed video and audio files over a cable in a network.  It is ideal for transmission of bulky high definition video files, 3D data, and Ethernet data over a single cable. However, it does require specific connectors. HDMI video systems are commonly used for cameras, surveillance, gaming consoles, television, and related applications. HDMI along with HD data transmission, facilitates inter-device communication on the network. It uses transition minimized differential signaling (TMDS) which prevents signal degradation as it is transmitted over a cable. It also facilitates encoding. This post discusses the details of HDMI, HDMI video systems, and the way to split the HDMI signal for sharing files between two monitors. 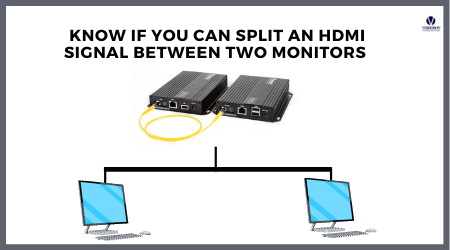 
The initial HDMI specification or standard was published in 2002, and the standard has evolved since then considering security and other features in devices. Several millions of HDMI devices have been made and sold since then. The latest update was made in 2017, considering the surging demand for AR and VR, immersive experience in entertainment devices, and more such factors. As far as surveillance systems are concerned, HDMI is being increasing used even in mission critical applications such as defense and aerospace.  In these sectors, they use embedded HDMI systems. The latest HDMI 2.1 specification supports a bandwidth of 48Gbps with the help of the ultra-high speed HDMI cable. This specification supports high resolutions up to 10K. It offers Dynamic HDR support which facilitates excellent picture quality in terms of contrast, brightness, and a variety of color gamuts.


The demand for High Definition Multimedia Interface for CCTV applications has grown for obvious reasons as HDMI is better in many ways than most other standards. You can connect high definition cameras in your CCTV application to the computer or a display screen with the help of HDMI converter and a simple coaxial cable. The cable is connected via BNC connectors, with the output end connected to the CCTV camera and the input end to the HDMI converter. Additionally, an HDMI cable is used to connect the output end to the HDMI converter and the input end to the display screen, television, or computer. With a remote control, like we have for televisions, you need to simply switch to HDMI input to be able to live stream whatever the CCTV camera captures. In case you only need to watch some footages from multiple locations, you can use a CCTV fiber kits. This is how you can see multiple locations footages on a single display screen.  But what if you have to watch these footages or live stream in multiple display screens at a time? In this case, an HDMI splitter is used.


While a good High Definition Multimedia Interface for CCTV applications helps in terms of clarity and video quality, to watch it on multiple monitors, you need a splitter. An HDMI splitter is a device which can offer the same output from a single CCTV camera to multiple computers or displays located distantly. This device takes in the output from the camera and splits it into two or more video streaming files. The splitter must be compatible with the other devices on the network, and a verification process needs to be carried out once the connection is established. This is because a good-quality splitter uses high-bandwidth digital copy protection (HDCP) protocol. This is an authentication protocol, wherein the source device checks the authentication key of the receiving device. While these splitters offer the exact output on two or more screens, it is only meant for viewing. In case you need to edit these files or do something more to it, which is a part of the film & television editing, you also need to insert the right graphics card into your system. It is quite simple to use. All you need to do is plug in the splitter to the source device such as a camera at one end, and connect it to the display screens as well. The splitter takes in the signal from the source device like the camera and transfers it to the end devices such as the monitors or display screens.

If you wish to set up or upgrade an HDMI video system, surveillance system or sound system, or anything where video and audio files need to be transmitted, HDMI is a great choice. You need good quality HDMI converters, splitters, extenders, and so on, depending upon the application. It is always a good practice to buy licensed HDMI devices. Ensure you source these devices from reliable manufacturers and suppliers. VERSITRON is one of the leading manufacturers of fiber optic network devices, HDMI converters, Fiber media converters and so on. Their products have been successfully used in various robust fiber optic networks across the world.