HDMI Over IP vs HDBaseT – What is the Difference?

Building a network with minimum cables has become an important requisite for businesses these days. This is because cable cluttering may result in confusion and accidents if not managed properly. Fortunately, several technologies have been developed to accomplish this. HDMI Over IP and HDBaseT are increasingly popular and have gained immense acceptance owing to their beneficial features. Both HDMI over IP and HDBaseT distribute high-definition video signals from a single source to multiple screens using the existing Ethernet infrastructure. The distribution of video signals is performed using devices such as switches, adapters, splitters, and so on. However, both technologies do it differently. Whether to choose HDMI Over IP or HDBaseT largely depends upon your application needs. This post discusses HDMI Over IP and HDBaseT in detail. 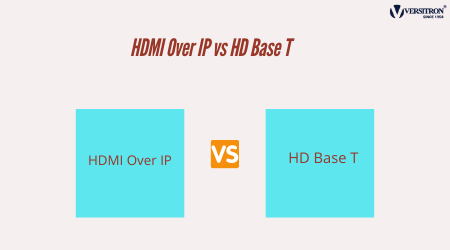 What is HDMI Over IP?

As discussed earlier, HDMI over IP or HDMI transmit high definition audio and video over Ethernet using devices such as switches, extenders, adapters, and Ethernet-enabled HDMI cables. These devices distribute received signals to multiple destinations without any degradation. An Ethernet HDMI cable can support a high speed of 100Mb per second required for the most demanding networking applications. HDMI over IP is best suited for long-distance data transmission. It uses fiber optic cables and AV/KVM extension devices for transmitting audio or video over long distances at a high resolution.

HDBaseT is a global standard used for the data transmission of uncompressed ultra-high-definition multimedia contents. The keystone of the technology is 5play that enables up to 8Gbps of high definition digital video and audio as well as control signals to be transmitted over a single cable on 100BaseT Ethernet. Since its introduction in 2010, the technology has drastically transformed the video distribution sector with increased reach, a rich feature set, and improved performance. HDBaseT provides a seamless experience by eliminating cable clutter without compromising on performance and quality.

What is the Difference Between HDMI Over IP and HDBaseT?

Here is a list of pointers that would help you understand how these technologies differ from each other. Let’s have a look at them.
After understanding both technologies and their dependability on HDMI products, you must source them from a trusted industry player. With years of market presence, VERSITRON offers superior quality HDMI over Ethernet products such as HDMI converters, HDMI adapters, HDMI over Ethernet switches, and HDMI video transmitters and receivers. The company also provides HDMI video to fiber optic installation kits in custom specifications to fulfill your application need.