Power over Ethernet or PoE is a key technology for wired Ethernet networks, which is chosen over other traditional technologies owing to the simplicity and efficiency it assures. This technology enables carrying data and power signals over a single cable, thereby helping reduce the wiring and complex architecture associated with earlier technologies. The IEEE802.3af standard divides the PoE technology into two types – powered device (PD) and power sourcing equipment (PSE). The power sourcing equipment or PSE powers the connection, while PoE PD devices receive this power. IP cameras, IP phones, and wireless access points are a few examples of PD, while PoE NVRs, PoE switches, and PoE media converters are a few important types of PSE devices used today. Generally, people focus on PoE PD devices. Owing to their widespread availability, it is easy to find information on them. However, PoE PSEs are rarely discussed. This post offers insights into PoE NVR, PoE switches, and PoE media converters and their applications in specific conditions. 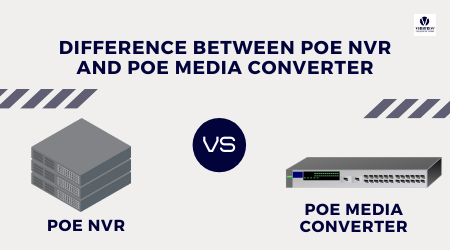 The following pointers will help you in understanding the differences between PoE media converters, PoE NVRs, and PoE switches.

PoE NVR stands for power over Ethernet network video recorder, which features a built-in PoE switch. They are commonly used in the IP video surveillance systems, where they process the visual data received by the IP cameras by encoding it and then supply it for viewing or even record it for storage. Like a PoE media converter, PoE NVR is also known to power IP cameras through Ethernet cables. They help simplify the network architecture of PoE-based surveillance systems.

Although the functions of these devices may seem similar, their properties largely differ across applications. The following pointers will help you understand them better.

The demand for Power over Ethernet (PoE) technologies is expected to increase in the future. It is important to choose the right device for your network. However, that is not enough. To take advantage of PoE NVRS and PoE media converters, it is important to source them from trusted manufacturers or suppliers. While purchasing them, ensure to check all the specifications and compare them with your requirements. Most experienced manufacturers will help you understand them better.