In any organization, networking infrastructure features several software and hardware that help establish a connection between different devices and computers on a network. These hardware and software devices facilitate data transmission in a computer network. Most times, this data transmission is conducted in either of the two modes – asynchronous or synchronous. Now, you may think of how these modes differ and which mode is better? Read this post to know the answers. 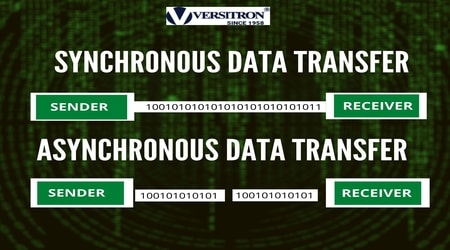 What is Synchronous Data Transmission?

In synchronous data transmission, the data is transferred in the form of frames or chunks between a receiver and a sender. The data is transferred in a paired approach, and thus, the synchronization of sender and a receiver is necessary. This synchronization becomes possible only when these systems share an internal clock. This data transmission method is employed to transfer time-sensitive data such as voice and real-time video through CCTV.

What is Asynchronous Data Transmission?

A Few Points of Difference between Synchronous and Asynchronous Data Transmission