Power over Ethernet or PoE technology finds uses in almost all industrial segments pertaining to business networks. This is because the technology enables data and power transmission over a single cable through separate lines. PoE is mainly designed for wired Ethernet as well as fiber optic networks. As far as fiber optic networks are concerned, you can connect a PoE switch and use a media converter along with it for transmission signal conversion. PoE is gaining momentum owing to the simplicity and efficiency it assures, and saves on external electric supplies for powering devices. Like other technologies, POE is administered through several PoE devices, such as PoE switches. There are different versions of Power over Ethernet switches in use today – PoE switches, PoE+ switches, and PoE++ switches. Would you like to know more about these switches? If that sounds yes, then this post answers everything about these devices. So, stay tuned. 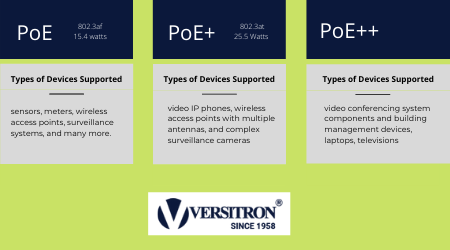 A Quick Overview of PoE, PoE+, and PoE++ Switches

Before getting into their differentiating factors, it is important to know about each of these switches. After the initial development and implementation of PoE switches, which are still in use, PoE+ and PoE++ were developed as better versions of the former.

PoE switches can be used to power a wide range of surveillance as well as audio-visual equipment in commercial facilities. This section offers a few common application examples of each of these switches. PoE switches are ideal for powering the following: Note: PoE switches are not recommended for data transfer over long distances or in applications where ambient temperature conditions may be present. Both these factors can have an impact on these switches.

The below chart summarizes detailed specifications of PoE vs PoE+ vs PoE++ switches.


PoE vs PoE+ vs PoE++ - Know the Real Difference

The following are some important pointers that will help you understand the difference between these switches.

After understanding PoE switches and their increasing use in several industrial applications, it is essential to source them from the authorized and certified manufacturers and suppliers. VERSITRON is one of the leading and trustworthy manufacturers and providers of industrial PoE switches. Over the years, the company has been offering PoE switches in different configurations. These switches support Ethernet, Fast Ethernet, and Gigabit Ethernet applications for secure and enhanced communication links. The company also offers several other network devices for fiber optic as well as blended networks.


Rich Tull
R.W. Tull is the President of Versitron Inc. He works closely with clients to review layout diagrams and drawings in order to ensure that the best fiber optic solution is achieved for a particular project.