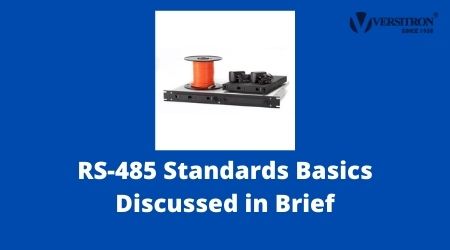 A Brief Overview of RS-485 Standard

It was originally referred to as EIA RS-485 in 1983, although it was implemented much later in 1998. It was designed to overcome the challenges of RS-422 and RS 232. This standard enables a data transfer rate of 10 Mbps up to 50 feet distance and can be easily extended to 4000 feet at a speed of 100 kbps. Against, RS-232, this standard allows long cabling distances and multidrop communication links where multiple devices are organized on the same bus. This is why it is quite common to find this standard in theaters, stadiums, and performance venues, where multiple devices are placed at long distances from each other. Unlike other communication protocols referred to here, this standard does not recommend or specify any communications protocol.

The following pointers will help you understand the electrical characteristics of EIA-485.

EIA-485 is more commonly used in industrial environments where multidrop communication links are used. Some typical applications include:
Knowing the details of RS-485 standard is not enough, you need to invest in quality devices to take advantage of this standard in your high-speed communication networks. VERSITRON is one of the most popular manufacturers of RS-485 standard devices such as 4 channel phone kits with RS485 data transmission capabilities, RS-485 2-wire telephone modems, and so on. These products have been an integral part of several high-speed telecommunication systems across the globe.