100Base TX and 100Base FX: Similarities and Differences Offered

Ethernet technologies have evolved over the years. The term Fast Ethernet has been popular since 1995, when it was covered under IEEE802.3u standard. Fast Ethernet is designed to carry the traffic at the rate of 100 mbit/s at the physical layer in the local area networks (LANs). Based on this speed, the cables are termed as 100Base TX. For a long time, these cables were referred to as 100 Base-T cables. The 100Base TX cable has replaced the earlier versions of coaxial cables – 100Base-T and 100Base-2. Along with these, there are 100Base FX cables available, too. At times, it may be confusing for people to differentiate between 100Base TX and 100Base FX cables. This post offers insights on these two types of cables and their increasing popularity in various applications and more. 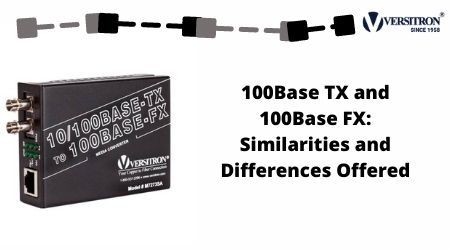 Important Terms You Need to Know About Fast Ethernet Technologies

The following are a few important terms one must be familiar with before reading through the comparisons between the two aforementioned types of cables.

The following pointers will help you understand these two technologies better and how they are similar and dissimilar in many ways
Against this, 100Base FX uses NRZ-I encoding scheme along with 4B/5B. The NRZ-I encoding refers to non-return-to-zero, which is a line code in binary code. The pulses in this encoding scheme offer high energy than return-to-zero (RZ code).
Along with the cables, you need to choose the network devices that are compatible with them. VERSITRON provides various types of conversion devices like 10/100Base TX to 100Base FX Industrial Fast Ethernet to Fiber Media Converter, 10/100 Base TX to 100 Base FX Fiber Optic Media Converter, Multimode SC, and so on. The company also provides industrial Ethernet switches and several other Ethernet devices, which have been installed in various applications across the world.