Understand the Use of Core Switches, Distribution Switches, and Access Switches in Ethernet Networks

Ethernet networks are expanding and their designs are evolving and getting complex. The high capacity wide area networks (WAN) networks are introduced in telecommunication, business communication, industrial automation, and many other types of networking applications. However, owing to the intricacy of such networks, periodic maintenance, troubleshooting, upgrades are performed in different phases. The networks are built in layers to ease maintenance-related issues. Multiple layers consist of different devices integrated together. The layers of networks may consist of devices like transmitters, receivers, media converters, network switches, etc. Out of all the devices, the network switches play important role in managed Ethernet networks. The switches contribute to directing the data and are responsible for the transmission of signals to the addressed devices only.
There are different types of Ethernet switches that perform different roles in the layers of high-capacity networks. Core switches, distribution switches, and access switches are the common types of switches used in layer-based or hierarchy Ethernet networks. This white paper introduces all three types of network switches and further discusses the selection criteria of each switch. 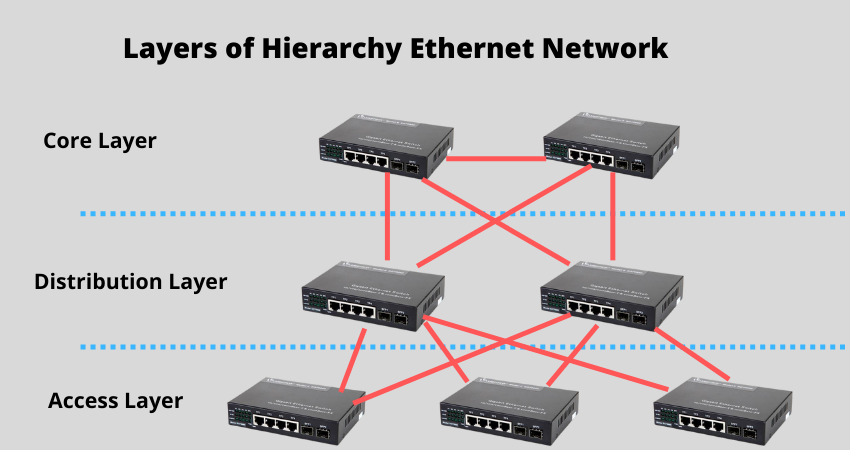 An Overview of Hierarchy Ethernet Networks

The hierarchy Ethernet network is a three-layer integrated setup of networking devices. These networks are designed with three tiers that facilitate strategic installation, management,  and maintenance, and so on. The strategic design of a hierarchy network may comprise more than three layers, however, the base foundation of this network consists of three layers i.e.; core layer, distribution layer, and access layer.

The hierarchy network consists of the following layers.

Owing to the importance of core switches, the quality and performance of the core network switches must be tested. To ensure that the switches can perform tasks of the core layer or collapsed core layer, the following parameters should be checked.

The distribution layer acts as an intermediate to the core and access layers. Therefore, the installation of distribution switches becomes truly essential.

The following parameters are essential for a distribution switch to perform effectively in layer 2.

Since the access layer is the most interactive layer of the hierarchy network, the following parameters of access switches must be confirmed.
Considering all the above-mentioned factors, core switches, distribution switches, and access switches can be chosen. However, to ensure the efficiency of the network, the quality of switches and performance parameters should be verified.

Complex Ethernet networks feature a hierarchy comprising multiple layers. The core layer, distribution layer (layer 2), and access layer (layer 3) are the three layers used to build hierarchy networks for industrial, domestic, and commercial data transmission. All three layers of the hierarchy network are introduced in this white paper along with the sole responsibility of each layer.  Further different types of network switches used in these networks are discussed, namely, core switches, distribution switches (layer 2 switches), and access switches (layer 3 switches). Since the selection of appropriate switches is essential to build a high redundancy network, therefore important parameters of these switches are discussed individually. To know more about these network switches, please visit https://www.versitron.com/.