Which is the Best Network Device – Hub or Switch or Router?

Network devices play a significant role in building a strong network and enabling a seamless flow of communication from one end to the other one or multiple ends. There are various network devices such as hubs, switches, and routers used for the purpose. They are termed as a network bridge with multiple ports that which use media access control (MAC) addresses to receive and forward the data to the destination devices. All these three devices function differently, even if they are combined into a single device. So, it is important to know which device you should choose depending upon your requirement. This post discusses further details on hubs, switches, routers, their types such as fiber optic switches or Ethernet switches, and features. 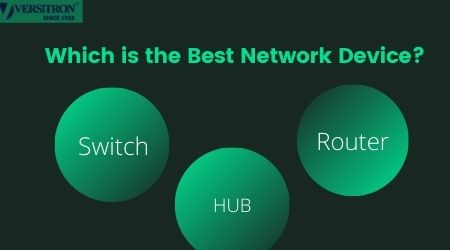 A Complete Overview of a Hub, Switch, and Router

These devices are different from each other in features and functionality, and it is important to understand them before making a decision. So, here is a quick overview of all three devices.

What is a Hub?

Hub is a multiport repeater. It has multiple ports that accept Ethernet connections from different network devices.  It is considered as the least intelligent device as it neither filters the data, nor it knows where the data is supposed to be sent. When a data packet arrives at one of the ports, it is copied to all of the other ports connected to it. As a result, all the devices receive the data packet, even if it is not for them. There are two types of hubs – active and passive. An active hub is a multi-point repeater which can regenerate signals, while a passive hub is a connector which connects wires coming from other systems.

What is a Switch?

A switch is smarter than a hub. Similar to the hub, it is a connection point for all the devices in the network. However, it is more efficient at passing a data packet across the network. It records the MAC addresses of the computers connected to it in a tabular format. When the data packet arrives, it reads the destination address and sends it to the appropriate system rather than sending it to all connected devices. If the destination address is not available, the switch sends the data packet to all the devices across the network.

What is a Router?

It is the most intelligent of the three networking devices. It is designed to understand, manipulate, and direct data packets based on their IP addresses. It connects a local area network (LANs) and wide area network (WANs) and features a dynamically updating routing table based on which they make decisions on routing data packets. When a data packet is received, it inspects the IP address and determines if the packet was meant for its network or not. If yes, then it receives the data packet, and if not then it sends it off to another network.

Hub vs Switch vs Router – What Is the Real Difference?

This section explores these networking devices further. With the following points, one can have a clear view of the comparison among a hub, switch, and router.
The information provided in this post will help you better understand these networking devices in detail. If you are looking to expand your network using the above networking devices, then it is important to source them from a trusted supplier such as VERSITRON. The company offer reliable network solutions at affordable prices. The company specializes in industrial ruggedized switches, fiber optic switches, fiber media converters, and more.