Know the Difference Between PoE Injector, Splitter, Extenders and Switches 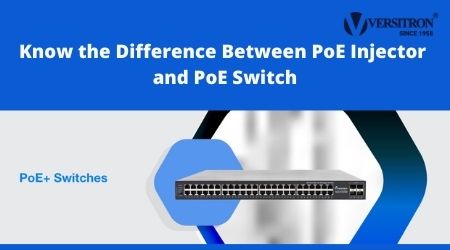 What is a PoE Injector?

A PoE injector plays more of a supporting or supplementary role. It provides power in a non-PoE network. Such networks may have a regular Ethernet switch without the PoE feature. The injector and the non-PoE switch are connected to an Ethernet cable and powered on. Overall, with injector, you can connect various other smart devices, such as phone, IP camera, and so on, onto the network. A PoE injector primarily enables you to connect a PoE-enabled device to a non-PoE port. This way, PoE-enabled device can transfer electric energy as well as receive data over the network.

What is a PoE Switch?

PoE switch is a network switch that comes with a built-in injector. There are PoE and PoE+ switches, wherein the latter is an updated version of the former and offers double the amount of electric energy. PoE switches use the IEEE 802.3af standard, while PoE+ switches use IEEE 802.3at.  These are managed switches that automatically determine the compatibility with other devices on the network. Usually, these switches have 8 ports or more. There are ports for copper as well as fiber networks, and hence most of these switches are compatible for both or blended networks.

What is a PoE Splitter?

These devices are combined with PoE injectors and PoE switches. Unlike other PoE devices, these devices do not take power and data input to turn them into a single output, rather they split the data and power and feed the power to the separate input. Generally, the PoE splitters are used in the scenario where non-PoE devices and no AC outlets are found.

What is a PoE Extenders?

What is the Difference Between a PoE Injector Vs Switches Vs Splitters Vs Extenders?

All PoE devices like PoE injectors, PoE switches, PoE splitters and PoE extenders possess specific applications. Here are some key differences between them.


How to Deploy the Right Device for Your Network?

If you want to expand your network, you can use fiber optics reliably. Also, when choosing PoE devices, be sure to source them from authorized and certified manufacturers and suppliers like VERSITRON. The company has been at the forefront of fiber optic technologies for several years. The company provides several types of PoE devices, including PoE injectors, PoE switches, PoE media converters, injectors, and splitters in different specifications. These devices have been part of the blended networks for several years now. You can get in touch with the experts at the company to make a wise selection.