Wavelength division multiplexing or WDM has gained immense traction over the last few years. It has been the preferred choice of technology for transporting massive data in the form of light signals over a fiber cable. By doing so, it maximizes fiber network capacity and avoids excess wiring. Initially, this classic technology has been used by various private carriers and service providers. However, with consistent upgrades and unmatched technical improvements, it has been widely adopted by governmental organizations, privately owned data centers, corporate empires, and many more. Are you intrigued to know more about WDM technology? This post attempts to answer every question you might have regarding wavelength division multiplexing. Read on to know more. 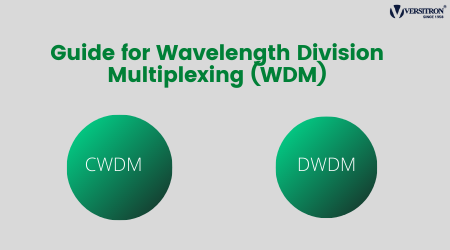 What is Wavelength Division Multiplexing and its Benefits?

WDM is a technique that multiplexes individual light wavelengths for transmitting data over a single medium. WDM components work opposite at the receiving end by de-muxing the combined light wavelength back into an individual and routed to their receivers. Simply, the WDM system combines signals with multiplexing (MUX) and separates them using de-multiplexing (DEMUX). Wavelength division multiplexing is popularly used in telecommunication applications as it expands the network capacity without laying more fiber. WDM offers various advantages, and the following are a few important ones:

Understanding the Classification of WDM in Detail

Depending upon the wavelength, the WDM systems are divided into two main categories:

A Detailed Discussion on Components of WDM

The WDM system consists of four main components as described below:

Are you looking for WDM solutions for your facility? If that sounds yes, then you are at the right place. VERSITRON is an industry-leading manufacturer and supplier of the devices required for WDM solutions. The company offers several types of fiber optic network devices.