An Overview of Energy Efficient Ethernet

Ethernet networks have long been used across industries for meeting the need of high speed data transmission. Green Ethernet or energy-efficient Ethernet comprise several enhancements done to the legacy Ethernet network, and is standardized by IEEE. As the term implies, it helps reduce power consumption in a network when the data activity is low. Before we delve deeper into this topic, it is essential to understand how the Ethernet network has evolved. 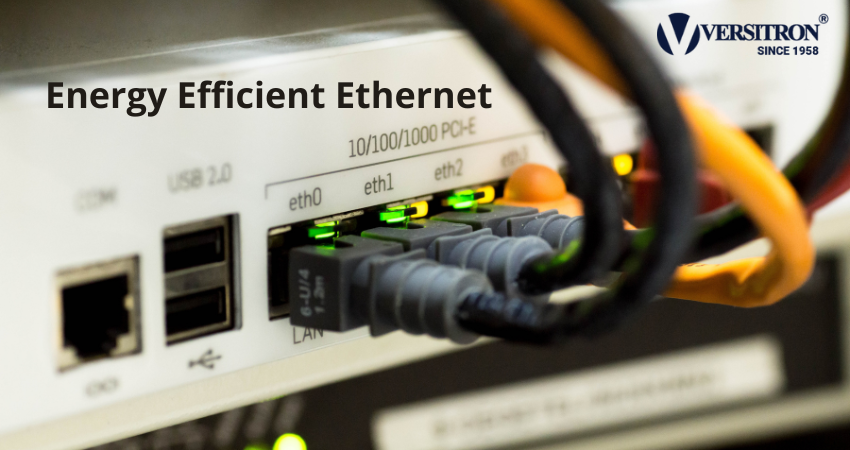 Today, Ethernet is the most widely used LAN network used by businesses to establish their private network and to connect to the Internet. Here are some pointers which indicate its evolution and how it has evolved in terms of transmission speeds, distances, number of switching ports, connecting to dissimilar networks, blending with fiber optics, and so on.

What Are Ethernet Switches?

Ethernet switches are basically network switches that help establish connection among the devices on the network. They also help decide the route of data transmission and work on Layer 2 of the OSI model. These switches use the MAC address of a device so that the data packets are forwarded to the right device or destination. A network switch has several numbers and types of ports for connecting to devices from varied networks such as copper, fiber, and so on. Ethernet switches are simple to use and can be directly connected to Ethernet cables.

To be precise, green Ethernet is slightly different from energy-efficient Ethernet. Green Ethernet refers to a set of features or settings which help reduce the amount of power consumed by each device on the network. You can configure these settings on your network switch to help lower power consumption. With this, all the ports of the switch can get the energy detection feature. Green Ethernet switches work in two ways:

How is Energy-Efficient Ethernet Different from Green Ethernet?

The concept is almost similar; however, in case of energy-efficient Ethernet, only the devices with Gigabyte ports have the energy detection feature. Energy Efficient Ethernet (EEE) is a part of the IEEE 802.3az standard, which is designed to reduce power consumption during low link utilization periods on the physical layer. A normal Ethernet link in an idle or rest mode also consumes power. To reduce this excess consumption EEE was developed. EEE uses a signaling protocol called LPI or low power idle to achieve this. These LPI signals are exchanged by devices on the physical layer to indicate the same. This protocol indicates that the link can be set to idle in case of low or no traffic on the network. The link can be quickly switched to an active mode when required, and without losing any data frames. 10BaseT, 100BaseT, and 1000BaseT Ethernet ports are standardized by IEEE for EEE.

Till now, the focus was on Ethernet switches which are EEE enabled. However, we cannot ignore fiber optics and its significance in reducing power and increasing transmission speeds and efficiency. Fiber optic switches also support EEE. These switches with 1G and 10G SFP as well as RJ45 ports are next-generation switches which are designed to comply with all the IEEE 802.3 specifications pertaining to Gigabit Ethernet, Fast Ethernet, and IEEE 8-2.3az standards for EEE and Green Ethernet. Aside from this major feature, they perform as efficiently as other fiber switches and a lot of additional features such as QoS, AC/DC dual power supply, fiber and copper cable compatibility, port mirroring, IPv4 or IPv6 stating routing layer 3, and so on. These switches facilitate remote monitoring and control.

The best part of using Ethernet is its standardization by IEEE and energy efficient Ethernet is no different. Saving energy that is unnecessarily wasted is a crucial aspect an organization must consider when designing or upgrading their network. Even after considerations such as extending geographical distances, scalability for future expansions, use of PoE devices, blending fiber optics, EEE is highly recommended, and it can be easily set up or configured on your Ethernet ports. Also, it ensures that you do not lose data frames when a link is idle. This way it not only reduces energy consumption but also prevents excess heat generation, which happens when all the devices on the network are active and consume energy. So, this is an additional benefit. If you have a blended network comprising fiber and copper, consider installing EEE fiber switches. VERSITRON offers various Ethernet and fiber optic switches which are EEE enabled. They are quite easy to install and use, and are available in various configurations. The company offers various other network devices such as fiber media converters and modems which are a crucial part of any good network. For details, you can visit www.versitron.com and go through the information on EEE-enabled switches and various other network devices.