Why Use a Virtual LAN Configuration On Layer 3 Switches

Today, a virtual area network or VLAN has become popular as network complexity has exceeded the capacity of the local area network (LAN). Every system connected in the network sends broadcasts or data packets to communicate with other devices in a broadcast domain. As the number of devices on the network grows, the network becomes latent. This is where VLAN is used to separate broadcast domains virtually, reducing the need to create a separate hardware LAN to overcome a large-broadcast-domain issue. VLAN avoids the physical limitation of a LAN with its virtual nature, allowing an organization to increase their network, segment it for security measures, and reduce network latency. This post discusses step-by-step guidelines required for VLAN configuration. Read on to know more. 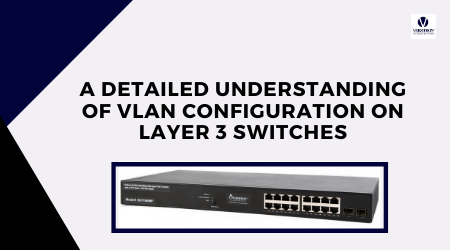 A Quick Introduction to Virtual LAN

Before discussing VLAN configuration guidelines, it is essential to know what VLAN is. A VLAN is a set of devices within a network and broadcast domain, reducing the need for a complex subnet system. The main reason for splitting a network into VLANs is to minimize network congestion. Segmenting LANs into more VLANs offers the following advantages:

The next section describes the reasons for implementing the VLAN configuration in detail.

Why Use a Virtual LAN Configuration?

There are several reasons to implement a virtual LAN configuration. Some important ones are listed below:

Setting-up two or more virtual LANs to communicate with each other needs the use of a Layer 3 switch or VLAN-aware router. VLAN configuration can be accomplished in either a web interface or command-line interface (CLI).


VLAN Configuration Guidelines for Web Interface
Setting-up VLAN in the web interface is simple as compared to the CLI interface. All you need to do is perform the following mentioned steps:

VLAN Configuration Guidelines for CLI Interface
SecureCRT software is required to create VLAN through the CLI interface. To perform the VLAN configuration, follow the below-mentioned steps.

The utilization of virtual LANs makes it easy for a network operator to partition a single switched network to match the functional as well as security requirements of the system without changing the existing network infrastructure. VLAN configuration using Layer 3 fiber network switches guarantees reliable and secure data link access to all the network hosts. Thus, it is important to use the right device for achieving the desired outcome. Several manufacturers offer VLAN connectivity solutions. However, they differ in factors such as performance, configuration, and prices. It is always a good idea to source these from trusted manufacturers like VERSITRON. Over the years, the company has been passionately providing networking connectivity solutions.