Over the years, Ethernet switches have become a standard in commercial and industrial applications. They are used to integrate different communication channels within the facility or organization for information centralization and management. Although they work with the same concept of transmitting Ethernet frames between the devices that are connected to them, they largely differ in their construction, design, and implementation. First, the industrial switches have a ruggedized construction and they are designed in adherence to industry standards. Today, their utility is proven in various industries in military and defense. The military Ethernet switches, in comparison to commercial switches, assure reliable, safe, and consistent communication in challenging environments. This paper analyzes the differences between military ruggedized Ethernet switches and commercial Ethernet switches. It also focuses on the applications of military ruggedized Ethernet switches and their adherence to MIL standards. 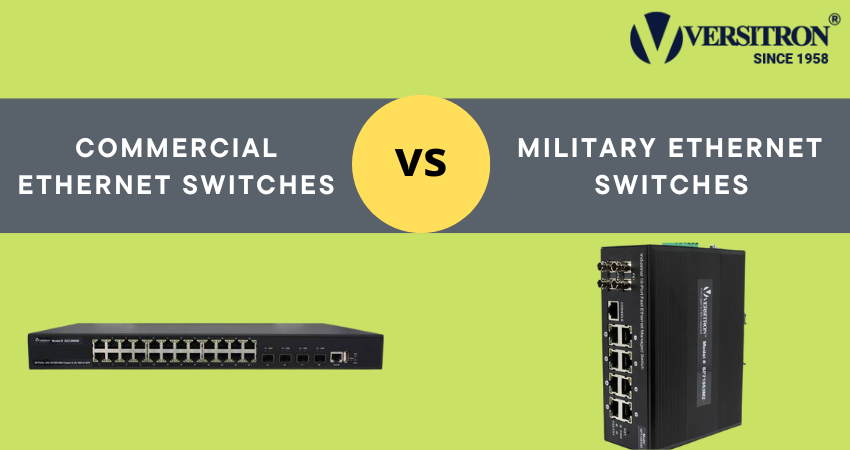 Applications That Use Military Ethernet Switches

Military Ethernet switches are manufactured and tested to the following important standards.

Unmanned Aircraft Systems Roadmap 2005-2030 by the Department of Defense recommends the use of network-supportive Ethernet technologies, owing to the distinct advantages it offers. The technology has reached maturity, which has resulted in the availability of commercial-off-the-shelf (COTS) software and hardware for military use. The popularity of Ethernet in military applications is driven by networks, which form the backbone of the Global Information Grid (GIG), a cornerstone of military’s connected warfare. All these factors indicate that the demand for Ethernet switches will continue to increase in military and commercial applications in the years to come.
VERSITRON specializes in various types of industrial switches including military Ethernet switches and commercial switches. The company also provides various products including CCTV analog video to fiber converters, MicroModems, and fiber data and voice links. All its fiber optic military solutions are built to MIL-STDs. For more information, visit https://www.versitron.com/industries/military.