Several devices used in a fiber-optic network may possess similar operations. Often multiple devices can be utilized to serve a specific purpose under different circumstances. The SFP modules and media converters are two such devices with similar features and end-purposes. Owing to certain similarities, these devices are often confused, however, in reality, they differ a lot. Along with the construction, the working principles of both fiber SFP modules and fiber media converters differ in certain ways. However, the end results of both devices can be interchanged under compatible operating conditions. This post introduces the fiber media converters and the fiber SFP modules followed by a discussion over the difference between their individual working principles. It also offers a few key points to pay attention to while a selection of SFP modules or Ethernet media converters for specific applications. 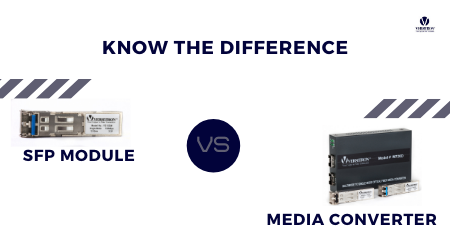 The following pointers would help you understand the differences between fiber SFP modules and fiber media converters.

Now that SFP modules vs media converters are being analyzed in terms of their individual properties and working principles, it is essential to focus on the following key points before selecting one of these devices for your applications.

No matter which device you find suitable for your application, it is essential to pay attention to the build quality and performance efficiency of these devices. Therefore, you should source SFP modules and media converters from trusted suppliers like VERSITRON. The company offers high-quality industrial media converters and other fiber optic communication devices. They offer EIA/TIA-RS-232, RoHS, IP30, and ISO-9001compliant media converters and SFP modules which certainly assure the quality and performance of their products.