A General Overview of Passive and Active CWDM Technology 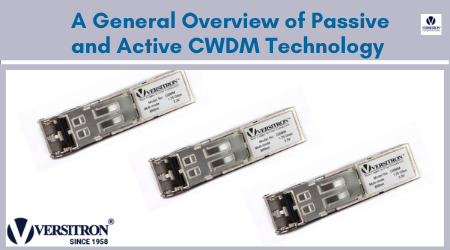 A General Introduction to CWDM

Gaining a basic understanding of CWDM will help you understand active and passive sections better. The following pointers will be helpful in this case.

Having known the CWDM technology, next comes the distinction between passive CWDM and active DWDM. This section introduces you to these terms and their effectiveness.
Today, the performance of the fiber optic network is controlled by coarse wavelength division multiplexing (CWDM) techniques. It is important to understand this technology and its types better before investing in it. The previous post offered you brief insights on active and passive CWDM, while this post aims to help you with the right selection.

Passive CWDM vs. Active CWDM: Which One to Choose


As the basic differences between these technologies and devices powered by them may be clear now. There can be confusion regarding their selection. The pointers in this section will help you with the right selection.


Knowing the differences between passive CWDM and active CWDM is not enough to realize their benefits. It is important to choose high-quality CWDM multiplexers if you wish to scale your existing fiber optic network. Owing to their increasing use, today, it is easy to find these devices from different brands. VERSITRON, a leading manufacturer of fiber optic products in the US, also provides CWDM multiplexers in different specifications. The company also provides different types of fiber optic products such as media converters, network switches, fiber optic modems, and so on. These products have been part of robust fiber optic networks for several years now.